Jazz in the Parks

JAZZ IN THE PARKS SPONSOR

ACKNOWLEDGING THE KIND COLLABORATION OF

JAZZ IN THE PARKS

This year, the most popular event of the festival, which brings jazz to outdoors, will take place on two days. Following performances by Young Jazz bands, Dutch band Koffie will take the stage and get everyone lounging on the lawn on their feet.

ART BLAKEY TRIBUTE BAND
Dedicated to playing the songs of jazz legends Art Blakey & The Jazz Messengers, Art Blakey Tribute Band was founded by Burak Bulut in Ankara in 2016. It consists of Erkan Sönmez on trumpet, Yunus Boyraz on tenor sax, Can Şenyüz on trombone, Hilmi Arslanoğlu on piano, Canberk Dağtekin on double bass, and Burak Bulut on drums. They have previously gave concerts at the Hacettepe University Ankara State Conservatory.

JmH
Founded in 2017, JmH (Jazz Meets Hip-Hop) re-interpret standards and popular songs by blending jazz with hip-hop and soul. For the past year, in addition to taking the stage as a trio, the band members have performed at many special events and festivals with various artists.

NAR
Nar is a modern jazz trio that blends modern jazz, minimalism and improvisation with electronic sounds. The band members have backgrounds in classical jazz, progressive rock and drum & bass, and cite John Coltrane, Esbjörn Svensson, Robert Glasper, Aphex Twin, Tool and  J Dilla as their main influences. The band’s repertoire consists of improvisation-based-lyric and multi-layered original songs and covers. Nar came to existence when the band members who knew each other since 2014 and have been playing together in the school orchestra, started to play Esbjörn Svensson songs early this year. It consists of Orhun Canca on keyboards, Orhun Uluşahin on bass and Fırat Balkaya on drums.

PELİN GÜNEŞ QUARTET
Born in Kazakhstan in 1995, Pelin Güneş started piano and voice training at an early age and performed in jazz choirs. She won an award at the Nardis Young Jazz Vocal competition in 2017. The idea of forming a band came to be after Sibel Köse, whose jazz vocal workshop Güneş studies at, introduced her to Mert Can Bilgin. With the addition of Eren Turgut and Erkan Zeki Ar, who were already working as a trio with Bilgin, the project became a quartet.

PORTRAIT AND A DREAM
Named after a Jackson Pollock painting, Portrait and a Dream aim to create their unique sound inspired by various musical genres. The band, in which Mehmet Ali Simavi’s compositions are interpreted collectively, sticks out with their eagerness to approach the immense legacy of Turkish music, borrowing from the idea of arbitrariness in jazz improvisations. The band consists of Mehmet Ali Şimayli on drums, Yiğit Can Öztop on bass, Lütfücan Kapucu on fretless guitar and Yiğit Avcı on keyboards.

THE KITES
The Kites is a collective musical project bringing together two childhood friends, Tan Deliorman and Ozan Erverdi, who grew up in the same apartment building and have been making music together from an early age on. The duo performs original songs and arrangements based on jazz, funk, rock and fusion, and will be joined by Yağmur Kerestecioğlu on keyboards, Baran Ökmen on bass and Can Kalyoncu on percussions during their live performance at the Festival. 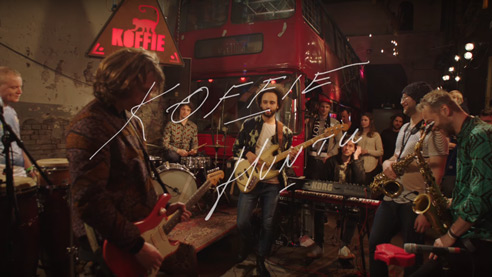